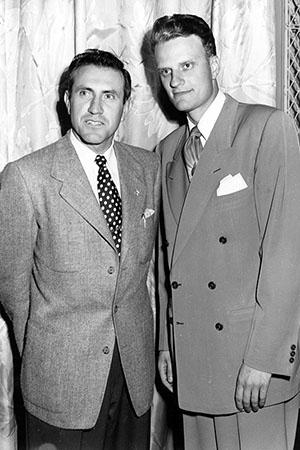 Adjusting to civilian life was difficult.  He still despised the Bird and was motivated by one overriding ambition.  He wanted to return to Japan and finish what he’d hoped to accomplish there.  He wanted to kill the Bird.

Although he read his Coming Home pamphlet, Louie didn’t really pay attention.  It described his symptoms, but he ignored them.  He couldn’t get all the bad war memories out of his head.  He had nightmares, couldn’t concentrate, tossed and turned all night and ... was afraid.  Could he still run?  Earn a living?  Kill the Bird?

In March of 1946, Louie took advantage of the government’s offer to give returning vets two weeks of rest and relaxation at one of four resorts.  In a life-changing decision, Zamp selected Miami Beach.

Visiting the Macfadden-Deauville Club, he saw a beautiful young girl named Cynthia Applewhite.  From a wealthy family, Cynthia was younger than Louie.  Her parents were unimpressed when they met the former POW and discouraged their daughter’s obvious interest in him.

Cynthia disagreed with her parents and married Louie on May 25, 1946.  Deeply in love, the couple had money at the start.  With $10,000 in back pay (from his POW years) and $1,600 of life-insurance proceeds (which he was allowed to keep), Louie invested  in various ventures.  When they failed, and the money ran out, his moods darkened and the nightmares worsened.

In 1949, after the birth of their daughter, Cynthia Battle Zamperini - Cissy for short - Louie seemed content, but he was still out-of-control.  When Cissy cried, he got upset.  He wondered whether he was he failing his child.

One night, during a particularly bad nightmare, Louie woke up to find his hands around Cynthia’s throat.  It was time, she said, to end their marriage.

Cynthia didn’t go through with a divorce, but she wanted to make changes in her life.  In September, of 1949, she learned about a young preacher named Billy Graham.  He’d come to LA, from Minneapolis, setting up a huge tent at the corner of Hill and Washington Streets.

Planning to hold a revival meeting for a few weeks, Graham and his team paid attention to the packed crowds and agreed to stay longer.  Cynthia wanted to check out what was going on inside the tent.

Trying, unsuccessfully, to convince her husband to attend a meeting with her, Cynthia went alone.  That night, after Louie returned from a night of too much drinking - which he often did - his wife seemed very different.  He wondered why:

Oh, Louie.  You know how I always say there’s something missing in our lives?  Now I know what it is.  For the first time I have peace in my heart.

Cynthia had listened to Billy Graham and decided he was right.  She’d become a Christian.

For days thereafter, she pleaded with her husband to hear Graham, but Louie refused.  Giving in one night, he listened but left early.  What did any of that stuff have to do with him?

As his nightmares worsened, he kept seeing the Bird.  During the day, Cynthia kept begging him to return to the tent:

I brooded and ignored Cynthia’s almost constant urging to return to the tent that night.  But she wouldn’t give up.  After arguing for hours, I agreed to go back, under one condition.  When that fellow says “every head bowed and every eye closed,” we're getting out of there.  (Zamperini, Devil at My Heels, page 240.)

Zamp returned to the tent, fully planning to leave at the predetermined time.  Then, he heard Billy say these words:

What kind of life are you living?  Are you satisfied with your life?

Just then, my whole rotten sinful life passed before my eyes and I began to get an inkling of what I feared I had to do.  Only I didn’t want to do it.  Why?  Men prefer darkness to light.  How could I give up the parties and the liquor and living for the moment and the fun?  (Devil at My Heels, page 241.)

Zamp grabbed Cynthia’s hand and told her they were leaving.  When he got to the aisle, something made him change his mind:

...I got to the aisle.  I stepped onto the sawdust path and knew it was my crossroads of decision.  I fought against it, perhaps harder than I’d ever fought, but in the end I made my decision, turned right, toward Billy Graham, released Cynthia’s hand ... (Devil at My Heels, page 242.)

When Louie met Billy, he decided to put his life on a different path.