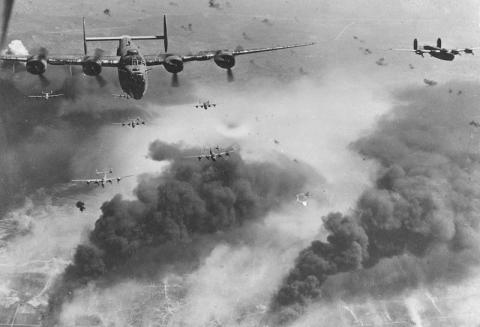 The National Museum of the Air Force maintains this combat photo of B-24s in action over Europe: “Through flak and over the destruction created by preceding waves of bombers, these 15th Air Force B-24s leave Ploesti, Rumania, after one of the long series of attacks against the No. 1 oil target in Europe.”

B-24s, like other WWII planes, took the fight to the skies in both the Pacific and European theaters.  Photographs, from the U.S. National Archives, give us a glimpse at some of the aerial battle scenes.

Louie and his crew mates lost good friends as they - and their B-24s - tried to take back Japanese-held islands in the Pacific.  "Super Man," and its crew, faced their own potential disaster on the day the men flew their Liberator to Nauru Island.