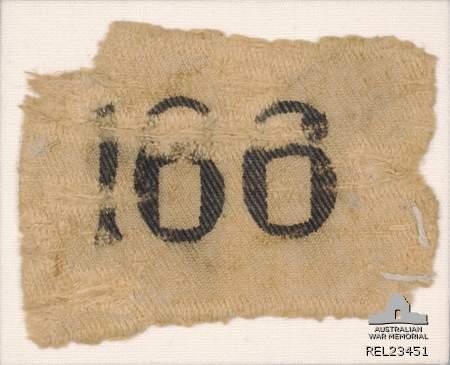 Prisoners of War at Naoetsu wore identification badges with numbers. This image depicts one such badge. According to the Australian War Memorial: "It was Issued to, and worn as an identity number by, NX56689 Mervyn Thomas Gronow of 2/18 Battalion while he was a prisoner of war at Naoetsu in Japan."

Louis Zamperini gave a radio broadcast on the 18th of November, 1944.  He didn’t know whether his family would ever hear the “Japanese Postman” program, but it was better than his continued silence.

Until that moment, no one in the outside world knew that  Zamp was alive.  He had never been registered as a POW.  Because he was missing for more than a-year-and-a-day, his family had received an official “presumed-dead” message.  What would be wrong with making a broadcast, as long as it wasn’t propaganda-driven?

Except ... it wasn’t the first broadcast which the Japanese authorities wanted from him.  They knew about the Zamperini “presumed-dead” notice, since it followed standard U.S. protocol - letters were always sent to families after their loved one was missing for a year-and-a-day.  Japanese propaganda makers wanted Zamperini - world-famous Olympian - to keep making broadcasts.

Future broadcasts wouldn’t be authored by Louie.  They’d be written for him.  They’d contain fault-finding phrases, like:

...I hope the folks back home are properly notified of the fact that I am still alive and intend to stay alive ... It’s certainly a sad world when a fellow can’t even be allowed to live, I mean when a fellow is killed off by a so-called official report ... How about that?  (Zamperini, Devil at My Heels, page 170.)

When Louie refused to exchange his rat-and-bedbug-infested dwelling for a slot on the propaganda-broadcast team, he was ordered to another POW camp.  Naoetsu, on the western side of Honshu, was no better than any other slave-labor camp, but at least (Louie thought) he would finally get away from the Bird and his endless array of Zamp-directed punishment.

Making his way west, during March of 1945, Zamp saw the impact of Allied firebombing on Tokyo.  He was stunned at the extent - and intensity - of the damage.

After a twelve-hour train ride to Naoetsu - a city just north of Nagano (scene of the 1998 Winter Olympics) - Louie was assigned to Camp 4-B.  There to greet him was ... the Bird.

The much-despised “commandant,” who thoroughly earned the hatred of POWs under his control, had been transferred to Naoetsu.  Louie had not escaped his tormentor after all.

During the summer of 1945 - after the war in Europe was over - the Naoetsu prisoners - identified by numbers - slogged on as local vermin descended on them:

Summer finally arrived, bringing with it oppressive heat and legions of vermin.  They dripped from the rafters and ceiling and crept through the floorboards of the old bunkhouse at night, leaving our bodies covered with welts.  The sand fleas were so thick that the earth itself seemed to be crawling, undulating like waves.  I tried to sleep outside but gave up, exhausted and, frankly, indifferent.  Bugs were the least of our torments.  (Zamperini, The Devil at My Heels, page 183.)

During that summer, POWs at Naoetsu also saw something else:   A new kind of Allied plane in the Japanese sky - B29s - which gave them hope that the war might soon end.  They’d heard rumors that all prisoners of war would be annihilated sometime in August - consistent with Japan’s “Kill-All Policy” - and could only hope the war would be over before the target date.

Then ... another rumor started to make its way through Naoetsu.  Hiroshima, apparently, had a cholera epidemic, closing it to all outsiders.  No one, apparently, could even call there.  It was only later - after a Navy torpedo bomber flew over Naoetsu - that the men learned what had really happened at Hiroshima.

Blinking its red lights to communicate in Morse code - “The war is over” - the plane returned a few hours later.  Its crew dropped a package including cigarettes, chocolate candy and a magazine with an exploding atomic bomb on its cover.  It wasn’t cholera which had crippled Hiroshima.  It was a new weapon which had been delivered by the Enola Gay.

When that new weapon ended the war, the Bird knew he had to fly away to a safe place.  He was sure he'd be listed on a war-crimes list.