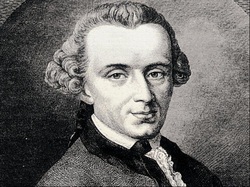 What about that giant of 18th century thought, Immanuel Kant? Kant suffered from neither penury nor some severe case of unrequited love. He seems, indeed, to have been a rather dull person, at least in the biographical sketch below by Manfred Kuehn. His daily schedule then looked something like this. He got up at 5:00 A.M. His servant Martin Lampe, who worked for him from at least 1762 until 1802, would wake him. The old soldier was under orders to be persistent, so that Kant would not sleep longer. Kant was proud that he never got up even half an hour late, even though he found it hard to get up early. It appears that during his early years, he did sleep in at times. After getting up, Kant would drink one or two cups of tea — weak tea. With that, he smoked a pipe of tobacco. The time he needed for smoking it “was devoted to meditation.” Apparently, Kant had formulated the maxim for himself that he would smoke only one pipe, but it is reported that the bowls of his pipes increased considerably in size as the years went on. He then prepared his lectures and worked on his books until 7:00. His lectures began at 7:00, and they would last until 11:00. With the lectures finished, he worked again on his writings until lunch. Go out to lunch, take a walk, and spend the rest of the afternoon with his friend Green. After going home, he would do some more light work and read. For all of their various complaints and ailments, throughout their most productive years these highly productive writers embraced Gustave Flaubert’s maxim, “Be regular and orderly in your life, so that you may be violent and original in your work.” I have always believed that these are words to live and work by, with the addition of a little vice or two to spice things up.
Powered by