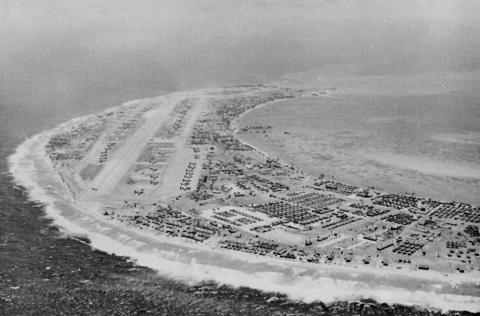 This image depicts Kwajalein Island after it was captured by the Allies.  The photo depicts how the island appeared in April of 1944, after it became an American Base. Image included in The Army Air Forces in World War II, between pages 686-7. Click on the image for a better view.

Phil and Louie drifted fourteen more days after Mac died.  They saw land - Wotje Island - on the 47th day, after traveling about 2,000 miles.  It was part of the very place - the Marshall Islands - which Louie had expected would be their landfall (if they lived).

Unable to avoid detection by the Japanese, both Americans were imprisoned ashore.  Surprisingly well-treated, they were shocked at how much weight they had lost - about 100 pounds each.  They were also warned about their next stop - Kwajalein - also part of the Marshalls.

Known as “Execution Island” - because few Allied captives ever lived to tell about their experiences - Kawjalein would make Zamp and Phil wish for their drifting, leaking raft.  Life on a shark-surrounded ocean home at least allowed them to push their predators away.  Life on Execution Island denied them any semblance of freedom, let alone any ideas of striking back.

If the raft had seemed small, one can only imagine what the captives thought about their tiny cells at Kawjalein.

For nearly seven weeks at sea, Zamp and Phil had kept their minds strong. Converting worries into life-saving actions, Louie had lost body mass but maintained dignity.  He and Phil were able to talk, about whatever they wished, for however long they wanted.  All that changed at Execution Island, where prisoners of war were treated worse than animals.

In his book, Devil at My Heels, Louie tells us how he reacted when he arrived at Kwajalein:

When I took off my blindfold my brain and my eyes fluttered with the unreality of it all.  After nearly two months floating under cast open skies and infinite seas, I found myself locked in a cubicle the size of a dog kennel.

The instant claustrophobia made me want to scream, but I was too weak.  Instead, I lay down and looked at my body.  Just six weeks before I’d been a vigorous athlete who could run a mile in just over four minutes.  Now I was fleshless, skeletal.

All my life I had kept my emotions tightly in check when it came to my own troubles, but I could no longer help myself.

Not only were Phil and Louie interrogated and beaten at Kwajalein, they endured experimental medical procedures.  Then they both developed dengue fever.

Although he did not initially realize it, Louie’s fame as an Olympian was known to his captors.  Planning another use for Zamp, and sparing Phil’s life at the same time, the Japanese authorities decided to let both men leave Execution Island alive.

After 43 days in a stinking dungeon, they boarded a ship for Truk  - part of the Caroline Islands - where the Japanese had a major naval base.  From there, they would continue to Yokohama - near Tokyo - and a secret camp for prisoners of war called Ofuna.

No one living at that camp was registered as a prisoner.  No one who cared about Zamp and Phil knew that the men were still alive.