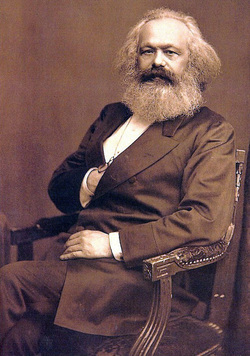 So how did Marx’s daily life compare to the morose and monkish Nietzsche? According to Isaiah Berlin, Marx also had his daily habits, though not quite so well-balanced.

His mode of living consisted of daily visits to the British Museum reading-room, where he normally remained from nine in the morning until it closed at seven; this was followed by long hours of work at night, accompanied by ceaseless smoking, which from a luxury had become an indispensable anodyne; this affected his health permanently and he became liable to frequent attacks of a disease of the liver sometimes accompanied by boils and an inflammation of the eyes, which interfered with his work, exhausted and irritated him, and interrupted his never certain means of livelihood. “I am plagued like Job, though not so God-fearing,” he wrote in 1858.

Marx’s money worries contributed to his physical complaints, surely, as much as Nietzsche’s social anxiety did to his. In both cases, smoking plays a significant role as a daily aid, for good or ill.