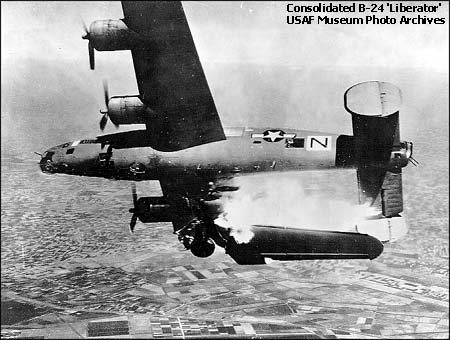 This photo of a B-24 “Liberator” is from the U.S. Air Force Museum collection.  It depicts a  B24 from the 464th Bomb Group after it took a flak hit.

When Louie completed his early military training, he was assigned to a bomb unit in 1942.  He would fight in the Pacific (not the European) theater.

Arriving in Hawaii, he first reported to Hickam Field (which had been damaged in the Pearl Harbor attack) on the island of Oahu.  Then he worked at Kahuku Air Base (where he practiced more extensive bomb-dropping missions).

When Zamp and his B-24 crew mates had enough training to actually run a real - not a practice - mission, they were surprised by how much distance they had to cover.  Sometimes they flew 5,000 miles round trip:

...we were the first to bomb Wake Island after the Japanese took it.  So we had to fly from Hawaii to Midway, load UP with bombs, and fly to Wake Island round trip, which was unheard of.  But we did it by taking out half the bombs and putting in bomb bay tanks, and we still were able to carry, with a half a bomb load, as much as a B-17 carried with a full bomb load.

So that's a mission for you...round trip from Midway to Wake is about 2,400 miles.  So you figure a mission is 5,000 miles.  (Zamperini, Oral History, Amateur Athletic Foundation of Los Angeles, page 50.)

Not only were the bombing missions long and dangerous, the planes the Allies used were far from perfect.  The same could be said of the men who flew them.

Huge numbers of men and equipment were lost in training missions.  Often, pilot and navigator errors contributed to - or caused - fatal crashes.  So did mechanical failures and general bad luck.

Statistics of men and planes, lost in training, are stunning:

In the Army Air Force, or AAF, there were 52,651 stateside aircraft accidents over the course of the war, killing 14,903 personnel...In the three months in which [Zamperini and his colleagues] trained as a crew, 3,041 AAF planes - more than 33 per day - met with accidents stateside, killing nine men per day.

The above losses occurred during training exercises, not actual combat missions.  Flying in WWII-era planes - on an actual bomb run - was a death sentence for many young men.

What about Louie Zamperini?  Who were his crew mates and what plane did they fly?