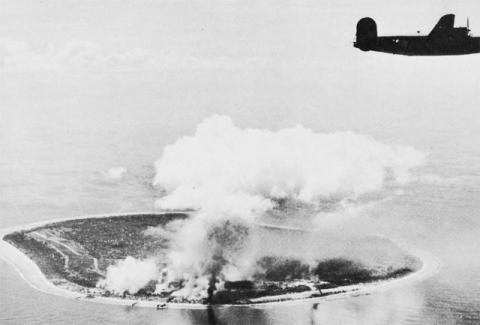 In this image we see the island of Nauru, under an American bombing attack, during 1943. Photo included in The Army Air Forces in World War II, Chapter 9.

Zamperini and his crew mates were able to fly long - really long - missions.  A loaded-with-bombs B-24 had a range of about 2,850 miles, which was helpful for many reasons - including the element of surprise.  Zamp and his mates flew such a mission during April of 1943.

Super Man’s flyers started the trip without their own plane.  Stuck in the mud on take-off - from Hawaii’s Kahuku Air Base - the plane was reunited with its normal crew at Funafuti.  That speck of land (then part of the Ellice Islands, now part of Tuvalu) was the gathering place for twenty-six heavy bombers.

Their mission was to attack a phosphate-producing island, known as Nauru, which provided Japan with raw materials for explosives and fertilizer.  It was a heavily defended place.

To keep the Japanese guessing where the Allied bombers were based, the B-24 crews would leave Funafuti, fly toward Guadalcanal, then make a turn and head for Nauru.  Led by Super Man, the planes would fly low (at 8,000 feet) and maintain radio silence.

The men did not understand why they were ordered to fly at the same altitude, thereby increasing exposure to anti-aircraft fire.  Their job, however, was to carry out (not plan) the mission.

Even though the noon attack was a surprise, the Japanese at Nauru were quick to respond.  As bombardier, Louie controlled the plane as he used his Norden bombsight to line-up targets.  Then ... Super Man began to violently shake.

Flak, and other anti-aircraft fire, surrounded the attacking B-24s which were flying at the same level.  Maintaining focus, Louie hit his targets.  He even managed to blow-up the island’s fuel supply.

Super Man - and its crew - took a major beating as the plane continued its attack.  Louie narrowly missed a facial strike, from a whizzing cannon, but he was uninjured.

Able to help his crew mates, Zamp and the co-pilot saved three men from death that day.  Their plane was less fortunate.  Riddled with holes, Super Man was damaged - likely beyond repair - with:

All the attacking B-24s returned to Funafuti, but a shaken pilot made a grave mistake en route.  Instead of maintaining radio silence, he called in a question: Should he return to Funafuti directly or via Guadalcanal?

Hearing the transmission, the Japanese learned where to send their retaliatory bombers.  Later that night, while exhausted flyers slept and Marines based at Funafuti either missed (or misinterpreted) radar readings, Japanese bombers laid waste to the island.  One of Zamp’s crew members, injured during the bomb run, died before the attack.

Super Man’s crew would never fly their plane again.  Instead ... after returning to Hawaii for some rest ... their skipper volunteered to take his crew on a search-and-rescue mission.  They ended up using a plane no one trusted.

It was called ... Green Hornet.