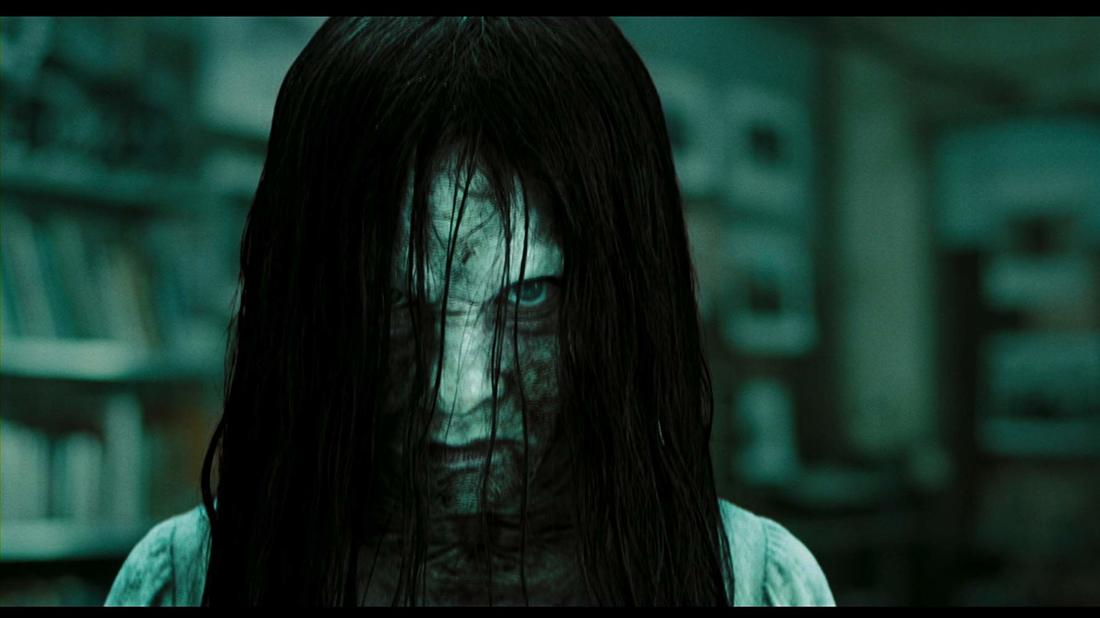 Hiroshi Takahashi...(1998 screenplay Ringu) (uncredited)
Cast (in credits order) verified as complete
Naomi Watts...Rachel
Martin Henderson...Noah
David Dorfman...Aidan
Brian Cox...Richard Morgan
Jane Alexander...Dr. Grasnik
Lindsay Frost...Ruth
Amber Tamblyn...Katie
Rachael Bella...Becca
Daveigh Chase...Samara
Shannon Cochran...Anna Morgan
Sandra Thigpen...Teacher
Richard Lineback...Innkeeper
​Budget:
$48,000,000 (estimated)
Opening Weekend USA:
$15,015,393, 20 October 2002, Wide Release
Gross USA:
$129,128,133
Cumulative Worldwide Gross:
$249,348,933
Trivia​
The "cursed" video is available as an easter egg on the DVD. Select look here and press down and your cursor will disappear. Press Enter. This has an interesting feature; your remote control is disabled. Once the "video" has started playing, you can't stop it, pause it, fast-forward it, or return to the menu. Unless you turn off the TV, you're forced to watch the whole thing. When it's over, the DVD returns to the menu, then you hear a phone ring twice before you're given control over your remote again.

Long before the movie premiered, the killer video was used as a commercial. The commercial did not mention any movie for nearly a month.

On its first week of release in the U.S. and Canada, select cinemas put actual copies of the cursed tape on seats for unsuspecting viewers as freebies. The cursed video is now available as an Easter egg feature on the DVD.

The tree with the fiery red leaves featured in the movie is a Japanese maple. The fruit of this tree is known as a "samara."

Until Stephen King's It (2017), this movie was the highest-grossing horror remake in history, with a total worldwide gross of over US $249 million.

An interesting feature on the VHS release: rewind the tape to the very beginning. (Or just put the tape in the VCR when fully rewound.) When you play it, you see the cursed video. After the segment ends, you hear a phone ringing twice, then it goes into the previews. Also after the movie has ended, you see additional scenes that help explain the mystery of the cursed video. In the VHS reissue, it just has the movie itself.
99 of 103 found this interesting | Share this
Sold more than two million DVD copies in the U.S. alone in its first 24 hours of video release.

There are no title cards or opening credits to the movie, although there is a flash of "the ring" during the Dreamworks logo.

At one point, in the scene where Rachel is researching Anna Morgan and Moesko Island, she finds information on a website that is located at: http://www.moeskoislandlighthouse.com. You were able to actually visit this one-page website, however it has since been moved to: http://www.sweb.cz/moesko/

DreamWorks took an unusual but effective tack on the release plan for this film. When the lengthy post-production and test screening process was complete (it took more time than usual largely because of edits to make the film less graphically violent and move it away from a potential R rating towards the PG-13 it received), the company decided to launch it in fewer theaters than expected. The logic was simple: if the film did well during the October 18-20, 2002 weekend, it could be expanded to great anticipation just ahead of Halloween. The Ring ended up improving its box office in weekend 2 and became one of the biggest surprise hits of the year.

The red Japanese maple (seen in the video) was artificial, built out of steel tubing and plaster, with painted silk for the leaves. (The crew dubbed it "Lucille" after "a certain red-haired actress"). While filming in Washington state, the tree was erected three times, only to have it knocked over by nearly 100-mile-an-hour wind gusts. In Los Angeles it was erected for a fourth time, only to be blown down again, this time by 60-mile-an-hour winds.

The role of Rachel was first offered to Jennifer Connelly (who would later star in another Japanese horror remake Dark Water (2005)). The script was then offered to Jennifer Love Hewitt, to Gwyneth Paltrow, to Kate Beckinsale, and finally to Naomi Watts.

The "Moesko Island Lighthouse" is a fictional name for a real lighthouse located in Newport, Oregon. Built in 1873, the real lighthouse is named Yaquina Head Lighthouse and is still currently an active aid to navigation. It is reputed to be haunted by the ghost of a past keeper.

Although the meaning of the title "The Ring" is ambiguous, Kôji Suzuki, the author of the original novel, always intended it to mean the cyclical nature of the plot, rather than the phone ringing.

In both the American and Japanese versions, the name of the little girl is connected to a story about death. The name "Samara" refers to a story retold by W. Somerset Maughamas "Appointment in Samarra", about a man who meets Death in the marketplace and flees to the town of Samarra.

This film was originally promoted under the title "Ring," like Ringu (1998), the original Japanese film upon which it is based. Shortly before release, the title was changed to "The Ring."

After the horse jumps off the ferry and gets (presumably) chopped up in the propellers, the titular ring can be seen for two frames, if paused at just the right moment (or play the scene frame-by-frame).

Subtle images of circles in various forms, such as the designs on the doctor's sweater, the shower drain and Rachel's apartment number, appear throughout the movie.

Brian Cox was the only actor considered to play Richard Morgan.

In the space of four years since the original Ringu (1998), the production budget multiplied roughly forty-fold.

Jennifer Love Hewitt was offered the role of Rachel Keller, but turned it down.

A Bad Religion sticker is partially visible in Noah's locker in the A/V room; Gore Verbinski(credited as Gore Verbinsky) directed the 1994 music video for "American Jesus" from Bad Religion's 1993 Epitaph Records release "Recipe For Hate". Other stickers visible in the locker include those for Epitaph bands Pennywise, The Refused, Lars Frederiksen And The Bastards, and Descendents.

Since the release of "The Ring" in Canada, the story of the cursed video has become very popular in some provinces, and the story is passed by kids in school as a rumor that it actually happened.

While the film takes place in Seattle, in earlier drafts of the screenplay, it originally took place in Massachusetts and Maine (for the scenes involving the Morgan family).

Amber Tamblyn (Katie) and David Dorfman (Aidan) also appeared together in the television series Joan of Arcadia (2003). Like in "The Ring", Tamblyn's character babysat Dorfman's character, who had a fixation on death.

The original WGA-approved credits listed Hiroshi Takahashi (writer of the original 1998 screenplay for Ringu (1998)) but his name is absent from the final print.

During the scene in which Rachel is on the balcony looking into windows of another building, shown on the TV of the third window she peaks at, is a Taiwanese soft drink commercial, featuring actor Takeshi Kaneshiro. This commercial is made in the early-'90s, when Takeshi's career was mainly in Taiwan as a pop idol.

A lot of alleged "ghost sightings" videos have had a ghost that copied Samara's "look," with the hair obscuring the face. The trend suggests the videos are hoaxes.

The October 3, 2001 draft of the screenplay credited Scott Frank as a writer.

Dr. Grasnik's grandson Darby originally had a line, but it was cut.

The pen that Rachel Keller uses throughout the film is a Sensa.

Spoilers The trivia items below may give away important plot points.

To promote this film the studio placed copies of the mysterious "killer tape" at concerts and events. The tape had a label directing whoever watched it to a web site (www.anopenletter.com) supposedly written by a pedophile who'd seen the tape and was now trying to warn others about his impending fate (this was the character portrayed by Chris Cooper in a sub-plot deleted from the theatrical release). The website contained links that led to other movie-related mock-ups, including a page written by one of Katie's friends who was unaware of Katie's death and believed she'd been kidnapped or run away, and a page written by scientists who researched psychic phenomena involving television transmissions. When the movie was released, Dreamworks deleted all the Web pages and denied ever having anything to do with them.

The ring shape motif is unique to the American remake. Kôji Suzuki, the author of the novel upon which the movies are based, says that the title referred to the cyclical nature of the curse, since, for the viewer to survive after watching it, the video tape must be copied and passed around over and over.

Numerous scenes were cut down or entirely cut from the film before release. Some scenes were present only at test screenings. Others showed up in previews or the "Don't Watch This" short film on the DVD.Midway through the movie Rachel rents some movies and gets laughs from one of the employees over her picks. This led to an alternate ending, in which Rachel put the cursed tape in the sleeve for one of her rented movies and returned it to the store, where it ended up under "employee picks."

When Noah and Rachel return to the inn, at the end of the movie, there's a sign that reads "Closed until further notice", under the "Shelter Mountain Inn" sign. In an earlier cut of the film, the cabin manager dies from watching the tape (see "Alternate Versions"). Probably that's the reason for the inn being closed.

Playing the movie frame by frame, in the exact moment when Katie Embry is scared to death at the beginning of the movie, you can see all the images that appear on the video. Each image appears for just a fraction of a second. The effect is repeated at the end of the movie.

Chris Cooper appeared in a small role but was cut from the film. In an interview Cooper told Sci Fi Wire: "It was what they call a bookend. I opened the movie and closed the movie. It was two scenes, and I was a serial rapist or a murderer who deserved everything that was coming to him. Because [Naomi Watts' character] was a journalist, I was trying to convince her that I had found God and I had straightened my ways and rehabilitated myself. I was looking for an out, and she didn't buy it, correctly so. Then in the tail end, she pays me a visit and gives me the tape." "What I hear is when they ran the screenings, it was more a disruption than anything. They said, 'Well, where's Cooper? We want to see more of him.' So they cut it all." Cooper's face can be seen briefly in the film on the front page of a newspaper in Noah's loft.

Its 59 minutes before Brian Cox makes a proper appearance in the film. Even then, he only gets 4 minutes of screentime, in spite of prominent billing.


During the climax of the film when Naomi Watts' character is knocked into the well by the television, Samara very briefly appears on the screen just as Rachel turns around to look at the television.
Powered by