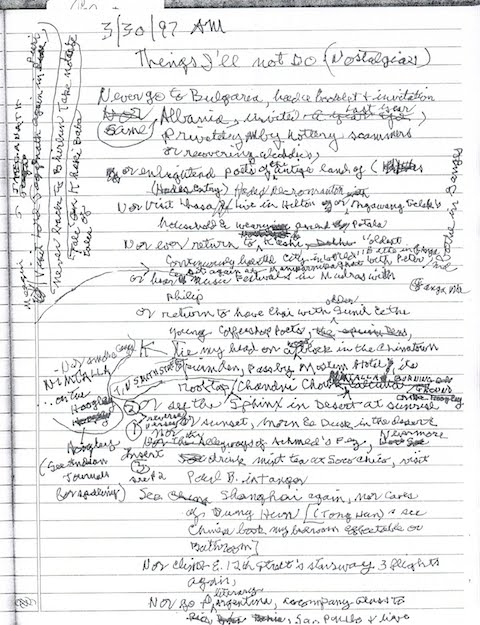 Allen Ginsberg died on April 5, 1997. Less than a week before, after the long terminally ill poet had made parting phone calls to nearly everyone in his address book, he wrote the poem above, “Things I’ll Not Do (Nostalgias).” He once called all his work extended biography, and we might call this particular work a piece of biography extended into speculation, comprising all the places (Tibet, Morocco, Los Angeles), people (composer Philip Glass, noted Tangier expat Paul Bowles, his own relatives), and things (attending concerts, teaching students, smoking various substances) he knew he would never experience again, or indeed for the first time — items left over, in short, from what we might now call Ginsberg’s bucket list. The transcript runs as follows:

As much of a final statement as it sounds like, “Things I’ll Not Do (Nostalgias)” remains, in a way, a work in progress, given the manuscript’s semi-decipherable hand. “Although many of his poems’ first drafts looked like this,” say the caretakers of AllenGinsberg.org, “if anything was unclear, we could just ask. That, obviously, wasn’t an option after April 5 that year.” Ten of Ginsberg’s associates passed the paper around, Google- and Wikipedialessly trying to piece together all of his characteristically far-flung references. The Caves of Dunhuang “went incorrectly transcribed for the first edition as ‘cares of Dunhuang’, since none of us were aware these were caves,” and “when we got to the ‘antique lands of Hades Necromanteion,” we couldn’t find a single reference to it anywhere, and in the end simply stated ‘Hades Gates.’ That’s how it’s published today — still. Till the next edition that is.”

The Hurricane by Hart Crane read by Tennessee Williams from Don Yorty on Vimeo.

The Broken Tower by Hart Crane read by Tennessee Williams from Don Yorty on Vimeo.