Bert McCoy's
"MyTeaching Resources"
English 9-12
​"The cinema is not an art which films life: the cinema is
something between art and life. Unlike painting and
literature, the cinema both gives to life and takes from it,
and I try to render this concept in my films.”
- Jean-Luc Godard
Narrative Design: 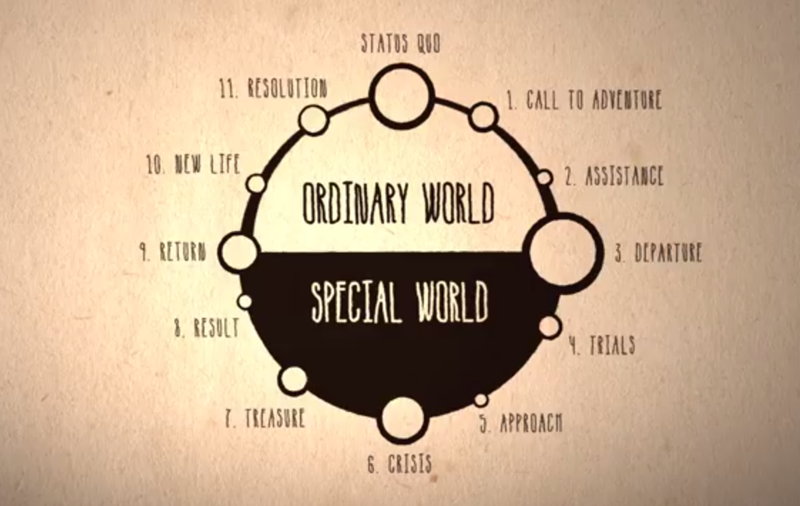 "The cinema is not an art which films life: the cinema is
something between art and life. Unlike painting and
literature, the cinema both gives to life and takes from it,
and I try to render this concept in my films.”
- Jean-Luc Godard


Narrative Design:
What is it?
Narrative is...A Story
Design is...How it all comes together

How is film different?
Film although derivative of Theatre and Literature has developed its own language. That magic is due in large part to…

Temporal and Spatial Manipulation:
Manipulating time and space allows films to take you anywhere at any time.

Who’s responsible for creating it?

Screenwriter:
Person(s) responsible for creating the narrative in its written form.

Director: Person most responsible for creating the narrative through a film’s production.
Key Ingredients:

Characters:
Focus story and propel it forward. They are often a blend of the ordinary and the extraordinary.

Character development:
What do they want and what are they willing to do to get it.

An Anti-hero:
Someone who does bad things, but for good reasons

A narrative usually has Conflicts:
problems...

External:
A Story:
What is told

The Plot:
How it’s told

Exposition:
The Information necessary to understand the story.

Diagesis:
Everything that exists within the world of the story.
a. Characters
b. Places,
c. Events,
d. Etc.

Diagetic:
If it can be perceived within the world of the story by the characters and audiences alike it is said to be Diagetic.
Music? Sometimes
Credits? No


Non-­Diagetic:
Anything that happens outside the world of the story, but is a part of the movie. Can be perceived only by the audience, but not from within the story.

Veracity:
A sense of believability or reality in the created world of the story.


Parallelism:
Explicit or implied connections between characters and or events in a film.

Non-Linear:
Not in chronological order

Narration
Perspectives:
1st person:
From a narrator or a single character’s perspective. The “I.”

3rd Person:
Omniscient narratives: Knows present, past, and future.
Knows it all and knows what to show and when to show it…God like.

Restrictive narratives:
Has a limited perspective of one or two characters.

Reflexive narration:
Challenging/Subverting/Cause ruin to the veracity of the narrator’s point of view.

Is a Classical Hollywood Narrative the same as a Classic Film? NO.

A Classical Hollywood Narrative is a prototypical design of a film…not whether it is good, bad new or old.

So what is it?

The key Ingredients of a Classical Hollywood Narrative are:

A Single protagonist who:

The Story develops chronologically based on obtaining certain goals, which are…

Want To Believe – The Power of NarrativeWe are obviously living in a technological super age when it comes to effects. Go to YouTube and type in “VFX breakdown” and you’ll see the latest and greatest Hollywood has to offer. But many still deride Visual Effects – saying they can always spot CGI and that it’s ruining film today as we know it.
But then there lies sort of the odd conundrum of 1940′s The Thief of Bagdad.


From Roger Ebert’s own great movie review (May 6, 2009)
It remains one of the greatest of fantasy films, on a level with “The Wizard of Oz.” To see either film is to see the cinema incorporating every technical art learned in the 1930s and employing them to create enchanting visions. Today, when dizzying CGI effects, the Queasy-Cam and a frantic editing pace seem to move films closer to video games, witness the beauty of “Thief of Bagdad” and mourn.
If we were to be completely honest the special effects of The Thief of Bagdad simply don’t hold up well today – many of these techniques are about the same quality as the output from a first year high school video class:


Are we really suppose to mourn a film which features a blue screen job like that? Even the use of practicals in the shot on the right is obviously a paper mache form on a machine. It moves with the linearity of a Murphy bed being lowered from the wall and twice as slow.
And yet, this film makes Roger Ebert’s “Great Movies” list. To be fair, The Thief of Bagdad showcased groundbreaking special effects for it’s time but now, taken out of context and compared to modern techniques, they’re laughably incompetent. How does a film that trades so heavily on special effects survive to be considered a classic?
The answer is simple – we want to believe.


Belief is our only mechanism for understanding the world. The universe is nothing more that a swirling soup of energy – vibrations of energy make up matter and electromagnetic forces give us the illusion of solidness – of touch. Our eyes respond to a narrow band of these vibrations – a small section we call visible light that stimulates cells to send electrical impulses to our brains. Sound is the beating of air molecules against a drum in our ear canals. From the constant feedback we get from our senses we try to gather information about the world around us and that begins with a belief that our senses represent reality.
But our senses are easily fooled – not just by trickery but by everyday interactions. We look in a mirror but we do not believe there is an identical person standing on the other side of the glass. When it’s foggy outside, we don’t assume that the world has been erased and turned gray – instead we believe that there is a low hanging mist that obstructs our view. We don’t need to test it every time, we just believe even though our senses may tell us otherwise.
In the case of the physical world, science has done a pretty outstanding job reaching beyond our biological capabilities in order to explain to universe. But even science itself is a belief - more accurately a philosophy (hence the Ph. in Ph.D). Things get even more muddied when we step into history, politics, morality, ethics and of course film criticism.
A friend on Facebook once worried about the future of information now that face swapping technology can make people say anything - people will be easily fooled into believing anything. I had to remind him that we don’t have the technology yet but there’s already plenty of people on Facebook that will believe anything (like ahem.. chemtrails). The bar to fooling people is already incredibly low, you don’t need high tech to get people to buy on some phoney baloney crap (like… chemtrails).
That’s because it doesn’t matter what the reality is – we as human beings want to believe. We want the narrative we hold true to be true. And that means seeking confirmation and vilifying opposition. Even the pursuit of “reality” is flawed in that it believes “reality” to be something that is knowable or measureable. The trouble with this understanding of the world is… you guessed it… it itself is a belief.
This is not a pipe
So what the hell does this have to do with filmmaking?
How we approach film and talk about film and make film is based on our own internal narrative – what do we believe and want to be true. In the passage above, Roger Ebert has already created the narrative in his review – his narrative shapes how we perceive – predisposing us to liking the film as superior to modern creations because we all admire and like the late Roger Ebert. We can tolerate the special effects because we have the narrative that it was groundbreaking for it’s day whereas a modern CGI cash grab has no excuse (the fact that Thief of Bagdad is just charming helps too).
But many more negative judgemental themes float about in film discussion circles today – themes like “the Golden Age of Hollywood” or “CGI is crap” or “Movies from the 70s are way better than today”. These are are prevalent in the zeitgeist but easily dismissed with evidence (75% of the films made in the Golden era were B movies, Plenty of beautiful CGI out there, and the 70s had their fair share of crap). The danger in these critical themes is they predispose us from enjoying contemporary culture in exchange for a fleeting sense of superiority.
In terms of filmmaking, an internal narrative can blind us to possibilities of our medium. There is a myth about Alfred Hitchcock that he storyboarded every shot so that when it came time to shoot the film, it was just a clinical matter of following the storyboards. This narrative makes for great legend building, but is far from the truth and even completely undesirable in live action – you don’t just draw a shot and it magically comes to being. But the narrative persists and it colors young filmmakers minds thinking everything needs a storyboard instead of letting a scene grow organically.
Narratives are powerful things. Narrative makes film work. We know the CGI dragon isn’t real in the same light that we know The Prince of Bagdad doesn’t have a humongous genie. But it doesn’t matter (or it shouldn’t) because ultimately we want to believe. We buy in because a good film asks us to.
The magic of the human experience and the magic of the narrative meet at the crossroads called cinema. It is our most powerful tool and yet it can be our most limiting. Being prepared to change that belief, to weigh and accept new and different modes of thinking will lead to better filmmaking and better film viewing experience. But in the end, perhaps that’s just wishful thinking.