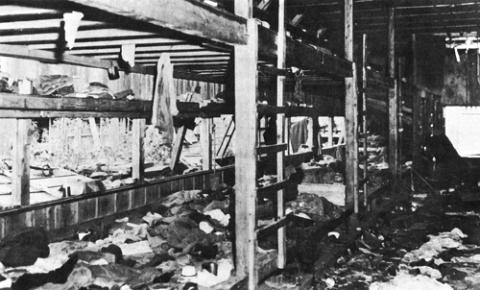 This close-up of a POW prison barracks appears in Reports of General MacArthur - MacArthur in Japan: The Occupation: Military Phase, Volume I Supplement, Chapter IV at page 101. The photo has this caption: "Close-up of Barracks, Omori Prisoner of War Camp."

Phil and Louie left Truk Lagoon six months before the Allies launched “Operation Hailstone” (on February 17, 1944).  During that attack, Japan lost more than seventy planes and forty ships.  (Today, divers from around the world explore the underwater life and beautiful reefs growing on the wreckage.)

There was little beauty in Zamp’s day-to-day life.  From Truk, he and Phil sailed to a secret prisoner of war camp at Yokohama, near Tokyo.  Initially, the men were excited that - at last - they could talk with other Allied prisoners.  When they arrived at Ofuna, however, they discovered a different reality.

Talking - interrogation-style - was the main reason for the camp’s existence.  It was strictly forbidden, however, among prisoners:

Ofuna was the secret, high-intensity interrogation camp run by the Japanese Navy, hidden from the populace and all relief agencies.  There would be no Red Cross supervision, no improved treatment.  No humanity.  I wouldn’t be registered as an official prisoner of war.  Men left the camp to be either executed or relocated.  If you died there, no one would know but your brothers in arms.  (Zamperini, Devil at My Heels, page 131.)

There was something else unsettling about Ofuna.  One of Zamp’s main interrogators was a Japanese student he’d known (and befriended) at USC.  Jimmie Sasaki - whom other prisoners called "Handsome Harry" - had been a Japanese informer even during his college days.  He was unable to break Louie.

Ofuna prisoners were housed in cells as narrow as their tatami sleeping mats.  Their blankets were paper; their pillows were straw.  Most wore the same clothes in which they had been captured.  Escape was a nonexistent remedy, except in someone’s imagination.

Since the camp was secret, the guards routinely ignored international law.  Prisoners did not eat meat once a week.  They existed on rice, sometimes mixed with straw or rat droppings.

Once, during Louie’s tenure at Ofuna, the men complained about the lack of meat.  They learned never to do that again after a truck delivered rotting fish:

Even before the driver dumped it into the trough, the smell overpowered us and the whole mass seemed to move.  In fact, it was moving, it being infested with thousands of maggots ... I helped shovel the mess into big soup tureens.  We all got the result, hot, the next morning ... The maggots floated lazily on top, as if in their own private swimming pools ... Some guys considered the maggots nutritious, guzzled, and threw up.  (Zamperini, Devil at My Heels, pages 136-7.)

Ofuna's prisoners - like those in other POW camps throughout Japan - were slave laborers.  Some worked in the kitchen, others did clean-up.  For a time, Zamp was the camp's barber.

Most guards, except for Komine (known as “the Weasel”), tipped him with a rice ball - a helpful gesture since Louie  weighed around eighty pounds.  As payback (for the lack of tips), Zamp once shaved-off most of  Weasel’s eyebrows.  (After the war, Weasel - also known as “King-san” - received a forty-year sentence for war crimes.)

Sueharu Kitamura - whom prisoners called “the Quack” - was Ofuna's most vicious guard.  In September of 1944, he beat Bill Harris - a highly educated American with a photographic memory - so mercilessly that Harris lost his intellectual sharpness for a time.  Although he recovered, the memory of all the sadistic beatings never left him.  (After the war, the Quack received a death sentence for his many war crimes.)

When POWs left Ofuna, they either made a right or a left turn.  Zamp soon figured-out that a right turn meant transfer to another camp.  A left turn meant execution.  Three months after arriving at Ofuna, Phil made a right turn.  He was sent to a prisoner camp for Allied officers in the southern part of Honshu.

After spending a year of his life at Ofuna, Zamp also made a right-turn exit.  He was sent to Omori, a manmade sand spit - between Yokohama and Tokyo - which housed hundreds of prisoners.  In September of 1944, he met Mutsuhiro Watanabe (whom POWs called “the Bird”).

Omori’s living conditions were atrocious.  Prisoners died of abuse, neglect and malnutrition.  Then ... after the Bird made his life as miserable as anything he'd ever experienced ... Zamp developed a sense about why he wasn’t beheaded at Kwajalein (although he didn't learn the truth until much later).

The Japanese knew he was a famous Olympic star and wanted to use Louie for propaganda purposes.  They’d kept Phil alive, too, but it was more about Zamperini’s voice - via Radio Tokyo - that spared their lives at Execution Island.

Still not realizing the actual plan, Louie was transported to a broadcast studio on November 18, 1944.  He would make a radio broadcast telling his family - and the rest of the world - that he was still alive.