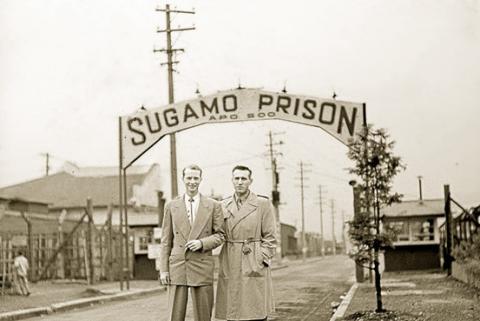 Initially refusing to ever set foot in Japan again, Louie Zamperini relented. Among other places, he visited men charged with war crimes who were being held at Sugamo Prison. He forgave all the men who had harmed him while Zamp was a POW. Image online, courtesy Louis Zamperini.

After that night in the tent, with Billy Graham, Louie Zamperini changed the course of his life.  He remembered his prayer on the life raft, in the middle of the Pacific Ocean:

If you will save me,
I will serve you forever.

He’d been saved, from death on the high seas and death at the hands of his tormentors.  He’d made it through the endless humiliations and indignities of life in a dungeon, in a cubicle, in a rat-infested prison camp.

He’d made it through the first part of his request - “If you will save me” - but he’d forgotten about the second part.  Life had been too hard.  It was too much to ask that he give up revenge against the Bird.

After Louie met Billy, the former POW never had another prisoner-of-war nightmare.  He lost his desire to kill the Bird.  He no longer hated the guards who’d tortured him.  He forgave Jimmie Sasaki for pretending to be his friend when he really was his enemy.  The turmoil of his life was replaced by calmness and a conviction that he’d found the right path.

Zamp began to speak about his experiences.  He wasn’t afraid to talk about his new faith, but he resolved that he would never push his thinking on anyone:

That’s one of today’s big problems: we’ve got too many die-hard fundamentalists the world over.  You can see the hate in their eyes when someone doesn’t agree with everything they say.  A dangerous few go to terrible lengths, even violence, to spread their beliefs.  (Zamperini, Devil at My Heels, page 251.)

One night someone suggested to him that not enough people were going to Japan.  If reconciliation was happening in Europe, shouldn’t it also happen in Japan?  Louie remembered the interview he’d once given TIME magazine.  He could recite, verbatim, the quote from that story:

I’d rather be dead than return to that country.

Why would he ever want to go back to the place where he was forced to do unspeakable things?

I couldn’t stand Japan.  The war memories - like the times we had to fertilize the potato and carrot crops with our own human dung, and then eat the result - just made thinking about a return trip worse.

Despite his initial resistance, Louie became convinced he had to return to Japan.  In October, of 1950, he arrived in Tokyo.  The city was recovering from the firebombing of 1945, and Zamp was surprised by its progress.

After visiting Ofuna and Omori, Louie rang General MacArthur’s office for permission to visit Sugamo Prison.  Many of his former guards were serving sentences there.

If Zamperini were really serious about forgiving people, he would know it by what happened at Sugamo where all of Japan’s convicted war criminals -  850 of them - were living in one place.

He met the Weasel, Sasaki, and even the Quack.  He was surprised to see Kano, a kind guard who had always helped - not harmed - the prisoners.  He saw others, but one man was missing ... the Bird.  Had he not been convicted of war crimes?

Learning the Bird had never been caught was surprising to Louie.  Learning he was number 23 on the top-40 list made sense, however.  Had he been captured, and tried, Watanabe would likely have received a death sentence.

Louie forgave his guards, during his 1950 meeting with them.  In 1952, President Truman authorized a General Amnesty and imprisoned war criminals were released.  After that, the Bird resurfaced.  He’d been hiding in a wooden cabin, in the wilderness near Nagano, for many years.

As the century wore on, the Nagano wilderness became a famous ski area.  In 1998, it was the scene of the Winter Olympics.  Louie - then in his 80s - carried the Olympic torch.  Part of his running route took him past his old prison camp at Naoetsu.

On the night of the closing ceremonies, CBS aired a special story to wrap-up the 1998 Games.  It was about Louie Zamperini and what had happened to him after his long ordeal in Japanese prisoner-of-war camps.  Included in that broadcast was an interview with ... the Bird.  When he'd heard Watanabe was still alive, Louie was completely stunned.

Although the Bird said he’d be willing to meet with Louie - who’d already forgiven him - such a meeting never happened.  Watanabe’s family had no idea about his past, or his status on the war-crimes list, and did not want him to meet with Zamperini.

Meeting with The Bird personally was less important to Louie than knowing how forgiving others had positively shaped his own life.  Using a quote often attributed to Mark Twain, 95-year-old Zamperini said this in an interview with John Meroney:

Forgiveness is the fragrance that the violet sheds on the heel that has crushed it.

Louie was 93 years old when Laura Hillenbrand published her best-selling book, Unbroken.  During his long life, he has given talks around the world. He turned his thirty-minute presentation - "Devil at My Heels" - into a book.  He’s spent many years helping children in various ways, including his Victory Camps.  He and Cynthia were married 55 years before she died of cancer, in 2001.

Zamp says that he is a blessed man.  Maybe, in part, that’s because he remembered - then acted on - the promise he'd made so long ago:

If you will save me,
I will serve you forever.

EPILOGUE:  When he was 97 years old, Louie Zamperini died on July 2, 2014.  At his passing, his family released this statement:

Having overcome insurmountable odds at every turn in his life, Olympic runner and World War II hero Louis Zamperini has never broken down from a challenge. He recently faced the greatest challenge of his life with a life-threatening case of pneumonia.

After a 40-day-long battle for his life, he peacefully passed away in the presence of his entire family, leaving behind a legacy that has touched so many lives. His indomitable courage and fighting spirit were never more apparent than in these last days.