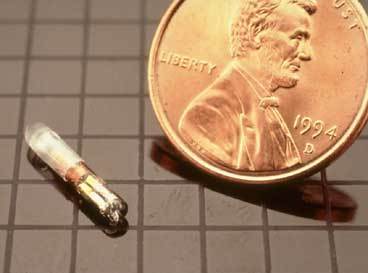 WASHINGTON — Medical milestone or privacy invasion? A tiny computer chip approved Wednesday for implantation in a patient’s arm can speed vital information about a patient’s medical history to doctors and hospitals. But critics warn that it could open new ways to imperil the confidentiality of medical records.

The Food and Drug Administration said Wednesday that Applied Digital Solutions of Delray Beach, Fla., could market the VeriChip, an implantable computer chip about the size of a grain of rice, for medical purposes.

With the pinch of a syringe, the microchip is inserted under the skin in a procedure that takes less than 20 minutes and leaves no stitches. Silently and invisibly, the dormant chip stores a code that releases patient-specific information when a scanner passes over it.

Think UPC code. The identifier, emblazoned on a food item, brings up its name and price on the cashier’s screen.

Chip's dual uses raise alarm
The VeriChip itself contains no medical records, just codes that can be scanned, and revealed, in a doctor’s office or hospital. With that code, the health providers can unlock that portion of a secure database that holds that person’s medical information, including allergies and prior treatment. The electronic database, not the chip, would be updated with each medical visit.

The microchips have already been implanted in 1 million pets. But the chip’s possible dual use for tracking people’s movements — as well as speeding delivery of their medical information to emergency rooms — has raised alarm.

“If privacy protections aren’t built in at the outset, there could be harmful consequences for patients,” said Emily Stewart, a policy analyst at the Health Privacy Project.

Advertise To protect patient privacy, the devices should reveal only vital medical information, like blood type and allergic reactions, needed for health care workers to do their jobs, Stewart said.

An information technology guru at Detroit Medical Center, however, sees the benefits of the devices and will lobby for his center’s inclusion in a VeriChip pilot program.

“One of the big problems in health care has been the medical records situation. So much of it is still on paper,” said David Ellis, the center’s chief futurist and co-founder of the Michigan Electronic Medical Records Initiative.

'Part of the future of medicine'
As “medically mobile” patients visit specialists for care, their records fragment on computer systems that don’t talk to each other.

“It’s part of the future of medicine to have these kinds of technologies that make life simpler for the patient,” Ellis said. Pushing for the strongest encryption algorithms to ensure hackers can’t nab medical data as information transfers from chip to reader to secure database, will help address privacy concerns, he said.

The U.S. Department of Health and Human Services on Wednesday announced $139 million in grants to help make real President Bush’s push for electronic health records for most Americans within a decade.

William A. Pierce, an HHS spokesman, could not say whether VeriChip and its accompanying secure database of medical records fit within that initiative.

“Exactly what those technologies are is still to be sorted out,” Pierce said. “It all has to respect and comport with the privacy rules.”

Applied Digital gave away scanners to a few hundred animal shelters and veterinary clinics when it first entered the pet market 15 years ago. Now, 50,000 such scanners have been sold.

To kickstart the chip’s use among humans, Applied Digital will provide $650 scanners for free at 200 of the nation’s trauma centers.

Fulcher could not say whether the cost of data storage and encrypted transmission of medical information would be passed to providers.

Advertise Because the VeriChip is invisible, it’s also unclear how health care workers would know which unconscious patients to scan. Company officials say if the chip use becomes routine, scanning triceps for hidden chips would become second nature at hospitals.

Ultimately, the company hopes patients who suffer from such ailments as diabetes and Alzheimer’s or who undergo complex treatments, like chemotherapy, would have chips implanted. If the procedure proves as popular for use in humans as in pets, that could mean up to 1 million chips implanted in people. So far, just 1,000 people across the globe have had the devices implanted, very few of them in the United States.

The company’s chief executive officer, Scott R. Silverman, is one of a half dozen executives who had chips implanted. Silverman said chips implanted for medical uses could also be used for security purposes, like tracking employee movement through nuclear power plants.

Such security uses are rare in the United States.

Meanwhile, the chip has been used for pure whimsy: Club hoppers in Barcelona, Spain, now use the microchip to enter a VIP area and, through links to a different database, speed payment much like a smartcard.