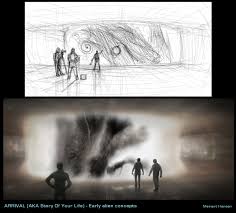 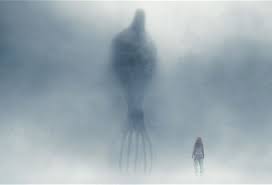 Arrival  is a 2016 American science fiction film directed by Denis Villeneuve and written by Eric Heisserer. It is based on the 1998 short story "Story of Your Life" by Ted Chiang and stars Amy Adams, Jeremy Renner, and Forest Whitaker. The film follows a linguist enlisted by the United States Army to discover how to communicate with aliens who have arrived on Earth, before tensions lead to war.
The film had its world premiere at the Venice Film Festival on September 1, 2016, and was released in the United States and Canada by Paramount Pictures on November 11, 2016. It grossed $203 million worldwide and received praise for Adams's performance, Villeneuve's direction, and its exploration of communicating with extraterrestrial intelligence. Considered one of the best films of 2016, Arrival appeared on numerous critics' year-end lists and was selected by the American Film Institute as one of ten "Movies of the Year".
It received eight nominations at the 89th Academy Awards, including Best Picture, Best Director, and Best Adapted Screenplay, and won for Best Sound Editing. It also received Golden Globe nominations for Best Actress for Adams and Best Original Score for Jóhann Jóhannsson, and was awarded the Ray Bradbury Award for Outstanding Dramatic Presentation and the Hugo Award for Best Dramatic Presentation in 2017. The score by Jóhannsson was nominated for Best Score Soundtrack for Visual Media at the 60th Grammy Awards

Plot
Linguist Louise Banks's daughter, Hannah, dies in adolescence from an incurable illness.
Twelve extraterrestrial spacecraft silently hover over disparate locations around the Earth. Affected nations send military and scientific experts to monitor and study them; in the United States, U.S. Army Colonel G.T. Weber recruits Banks and physicist Ian Donnelly to study the craft above Montana. On board, Banks and Donnelly make contact with two seven-limbed aliens, whom they call "heptapods"; Donnelly nicknames them Abbott and Costello. They both begin researching the aliens’ written language of complicated circular symbols, sharing results with other nations. As Banks studies the language, she starts to have flashback-like visions of her daughter.
When Banks is able to establish sufficient shared vocabulary to ask why the aliens have come, they answer: "Offer weapon". However, China translates this as "Use weapon", prompting them to break off communications, and other nations follow. Banks argues that the symbol interpreted as "weapon" might mean "tool", and that China's translation likely results from their interaction with the aliens using a highly competitive winner-take-all game.
Rogue soldiers plant a bomb in the Montana craft. Unaware, Banks and Donnelly re-enter the alien vessel, and the aliens give them an extremely complex message. Just before the bomb explodes, one of the aliens ejects Donnelly and Banks, knocking them unconscious. When they reawaken, the military is preparing to evacuate in case of retaliation, and the craft has moved out of reach.
Donnelly discovers that the symbol for time is present throughout the message, and that the writing occupies exactly one-twelfth of the 3D space in which it is projected. Banks suggests that the full message is split among the twelve craft, and the aliens want all the nations to share what they learn.
China's General Shang issues an ultimatum to his local alien craft, demanding that it leave China within 24 hours. Russia, Pakistan, and Sudan follow suit. Communications between the international research teams is terminated as worldwide panic sets in.
Banks goes alone to the craft, and it sends down a transport pod. Abbott is dying from the explosion; Costello explains that they have come to help humanity, for in 3,000 years they will need humanity's help in return. Banks realises the "weapon" is their language, which changes humans' linear perception of time, allowing them to experience "memories" of future events. Banks's memories of her daughter, Hannah, are premonitions; her daughter will not be born until some time in the future.
Banks returns to the camp as it is being evacuated and tells Donnelly that the alien language itself is the "tool". Reflecting the Sapir–Whorf hypothesis of how language shapes perception, those who master the language are able to perceive the future and past. She has a premonition of a United Nations event celebrating newfound unity following the alien arrival, in which Shang thanks her for having convinced him to call off the attack by calling his private number and reciting his wife's dying words: "War doesn't make winners, only widows."
In the present, Banks steals CIA-agent Halpern's satellite phone, a rarity when phones have been confiscated on the base, and calls Shang's number to recite the words. The Chinese announce that they are standing down and release their twelfth of the message. The other countries follow suit, and the twelve craft depart.
During the evacuation of the camp, Donnelly expresses his love for Banks. They talk about life choices and whether he would change them if he could see the future. Banks knows that she will agree to have a child with him despite knowing their fate: that Hannah will die, and Donnelly will leave them after she reveals that she knew this.

Filming Principal photography lasted for 56 days. It began on June 7, 2015, afteRenner had finished filming Captain America: Civil War. Filming was done mainly in and around Montreal, Quebec, Canada, with Saint-Fabien serving as Montana. The team took some time to find the right site to represent the landing, because producers wanted to avoid a mountainous site that might dwarf the scale of the ship, but thought that a barren location would be clichéd. Most of the filming that did not involve the exterior of a ship was done indoors on stages, although a real house was used as Banks's home. The scenes of the university where Banks teaches were shot at HEC Montréal.