BACKGROUND OF THE INVENTION

This invention relates to a method for the reduction of global warming resulting from the greenhouse effect, and in particular to a method which involves the seeding of the earth’s stratosphere with Welsbach-like materials. Global warming has been a great concern of many environmental scientists. Scientists believe that the greenhouse effect is responsible for global warming. Greatly increased amounts of heat-trapping gases have been generated since the Industrial Revolution. These gases, such as CO.sub.2, CFC, and methane, accumulate in the atmosphere and allow sunlight to stream in freely but block heat from escaping (greenhouse effect). These gases are relatively transparent to sunshine but absorb strongly the long-wavelength infrared radiation released by the earth. Most current approaches to reduce global warming are to restrict the release of various greenhouse gases, such as CO.sub.2, CFC, and methane. These imply the need to establish new regulations and the need to monitor various gases and to enforce the regulations. One proposed solution to the problem of global warming involves the seeding of the atmosphere with metallic particles. One technique proposed to seed the metallic particles was to add the tiny particles to the fuel of jet airliners, so that the particles would be emitted from the jet engine exhaust while the airliner was at its cruising altitude. While this method would increase the reflection of visible light incident from space, the metallic particles would trap the long wavelength blackbody radiation released from the earth. This could result in net increase in global warming. It is therefore an object of the present invention to provide a method for reduction of global warming due to the greenhouse effect which permits heat to escape through the atmosphere.

Relate to Brave New World:
What in the World Are They Spraying 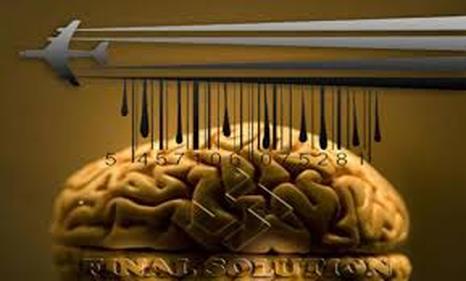