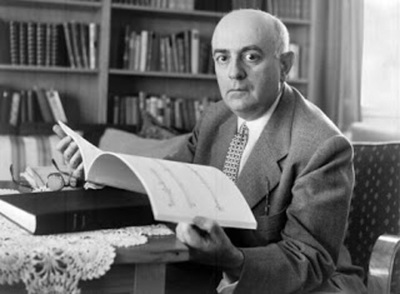 German critical theorist Theodor Adorno is known for many things, but a light touch isn’t one of them. His work includes despairing post-fascist ethics and a study on the sociology and psychology of fascism. Those who dig deeper into his catalog may know his rigorously philosophical Negative Dialectics or dense, opaque Aesthetic Theory. Given the seriously heavy nature of these books, you might be surprised, as I was, to read the paragraph below:

An exclamation point looks like an index finger raised in warning; a question mark looks like a flashing light or the blink of an eye. A colon, says Karl Kraus, opens its mouth wide: woe to the writer who does not fill it with something nourishing. Visually, the semicolon looks like a drooping moustache; I am even more aware of its gamey taste. With self-satisfied peasant cunning, German quotation marks (<<> >) lick their lips.

The skillful deployment of aphorism seems typical; the playfulness not so much. But Adorno’s short essay, “punctuation marks,” takes a sober turn shortly thereafter, and for good reason. Punctuation is serious business. Sounding much more like the Adorno I know, the dour Marxist writes, “History has left its residue in punctuation marks, and it is history, far more than meaning or grammatical function, that looks out at us, rigidified and trembling slightly, from every mark of punctuation.” Okay.

Well, Adorno would just hate what I’m about to do, but—hey—this is the internet; who has the time and concentration to traverse the rocky course of thought he carves out in his work? Maybe you? Good, read the full essay. Not you? See below for some bite-sized highlights.

Punctuation as music: “punctuation marks,” Adorno writes, “are marks of oral delivery.” As such, they function like musical notation. “The comma and the period correspond to the half-cadence and the authentic cadence.” Exclamation points are “like silent cymbal clashes, question marks like musical upbeats.” Colons are like “dominant seventh chords.” Adorno, a musicologist and composer himself, heard things in these symbols most of us probably don’t.

The semicolon: There is no mark of punctuation that Adorno rejects outright. All have their place and purpose. He does decry the modernist tendency to mostly leave them out, since “then they simply hide.” But Adorno reserves a special pride of place for the semicolon. He claims that “only a person who can perceive the different weights of strong and weak phrasings in musical form” can understand the difference between semicolon and comma. He differentiates between the Greek and German semicolon. And he expresses alarm “that the semicolon is dying out.” This, he claims, is due to a fear of “page-long paragraphs”—the kind he often writes. It is “a fear created by the marketplace—by the consumer who does not want to tax himself.” Right, I told you, he would hate the internet, though he seems to thrive—posthumously—on Twitter.

Quotation marks: While Adorno accepts every punctuation mark as meaningful, he does not accept all uses of them. In the case of the quotation mark, his advice is precisely what I have received, and have passed on to overly glib and thoughtless students. Quotation marks, he writes, should only be used for direct quotes, “and if need be when the text wants to distance itself from a word it is referring to.” This can include writing words as words (the word “word” is a word…). Adorno rejects quotation marks as an “ironic device.” This usage presents “a predetermined judgment on the subject”; it offers a “blind verdict.”

The ellipsis: On this mark, Adorno becomes very prickly, particular, and, well… elliptical. Three dots “suggests an infinitude of thoughts and associations.” Two is the mark of a hack. I leave it to you to parse his reasoning.

The dash: First, we have “the serious dash,” in which “thought becomes aware of its fragmentary character.” Dashes may signal “mute lines into the past, wrinkles on the brow” of the text, ”uneasy silence.” Dashes need not connect thoughts. The “desire to connect everything,” Adorno writes, is the mark of “literary dilettantes.” Thus the “modern dash” is debased, a symptom of “the progressive degeneration of language.” It prepares us “in a foolish way for surprises that by that very token are no longer surprising.” Adorno also prefers another use of dashes—more below.

Parentheses: Parenthetical phrases (like this) create “enclaves” and admit the “superfluousness” of their contents, which is why many stylebooks frown upon them. Their use in this way “capitulate[s] to pedantic philistinism.” The “cautious writer”—writes punctiliously cautious Adorno—will place parentheticals between dashes, “which block off parenthetical material from the flow of the sentence without shutting it up in a prison.” The parentheses do have their place, as do all marks of punctuation in Adorno’s lexical theory. But probably only if you are Proust.

Reading Adorno—on punctuation and anything else—can be intimidating. His erudition, his disdain for carelessness, middlebrow expediency, and the crude forms of expression given birth by commerce of all kinds: these are attitudes that can seem at times like overbearing elitism. And yet, Adorno understands the burdensome nature of writing prescriptions. “The writer,” he admits, “is in a permanent predicament when it comes to punctuation marks: if one were fully aware while writing, one would sense the impossibility of ever using a mark of punctuation correctly and would give up writing altogether.” Far too many have done so. We “cannot trust in the rules,” nor can we ignore them. What to do? Err on the side of the abstemious says our poker-faced German Strunk; to avoid sloppiness or rote misuse, follow an Epicurean mean: “better too few than too many.”